Careless Talk of The Times 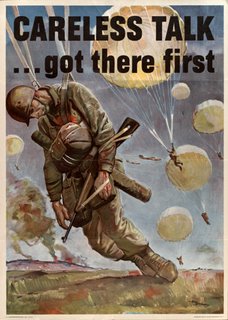 "Careless talk" is what the New York Times and the Los Angeles Times have published without responsibility, apology and without remorse. Vital intelligence has been compromised by irresponsible "leakers," reporters, editors and publishers. The person who leaked the report about the US tracking and cutting off terrorist funds should be prosecuted for treason, as should the reporters, editors and publishers of both newspapers.

And frankly, since there is something each of us could do to stop such media irresponsibility, I don't understand why someone hasn't called for a boycott of both those newspapers.

Perhaps the American people don't understand the seriousness of the situation. Perhaps they've forgotten that we have undergone a series of attacks from an enemy that is far more elusive and far more destructive than any we have faced before. Certainly the editors and publishers of those two former great publications don't understand the nature of the problem.

They are quick to criticize the Administration for not publishing their plans for executing the war and when someone leaks vital and sensitive information to them, they are quick to publish that information with no regard for the damage it may do -- not only in terms of American lives lost but in terms of how those revelations might shut down intelligence gathering.

Of course terrorist militants knew we were trying to shut down their financing; what they didn't know, and what the NY and LA Times were happy to reveal to them, was how our government was going about it. I suspect those editors and publishers know full well the damage they have done, and they knew before they did it.

When our grandson was a small boy, he did not like mushrooms at all and went to extremes to avoid them. Once he even said, "I hate mushrooms so much that I hate everyone who likes mushrooms." That's about the way I feel about an irresponsible press that places this nation in further jeopardy and refuses to correct a terrible wrong. I think I hate the LA Times and the NY Times and everyone who likes them.
Posted by Unknown at 3:13 PM

Done! Glad to see you, Matt. Come back soon.

These articles are fantastic; the information you show us is interesting for everybody and is really good written. It’s just great!! Do you want to know something more? Read it...:Great investment opportunity in Costa Rica: jcondos house, costa rica beach condos, condos rentals. Visit us for more info at: http://www.jaco-bay.com/

Jokes from my favorite comedian